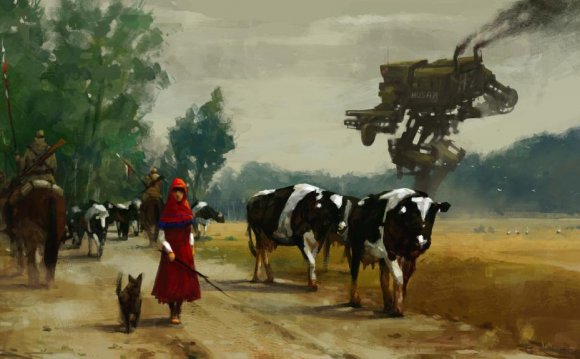 There is a legend about the three forefathers of Slavonic nations. There were three brothers Lech, Czech and Rus who wandered with their kin tribes away from the original Slavonic settlements in the present area of Ukraine (between the Vistula and the Dnepr rivers). Rus moved to the east while the other two wandered with their people westwards. Lech stayed in the lowlands and established his town near a white eagle's nest (the white eagle is the country's coat of arms). Czech went more to the south.

Slavonic tribes came to Poland in the 6th century AD. The first town of the Polan tribe was Gniezno, along with Poznan, the oldest capital of Poland. It was there, where the first royal dynasty resided, the Piasts, who drew their pedigree from the mythical Piast, a wheelwright who founded a dynasty that ruled until 1370. The Polan tribe dwelled in the western areas of today's Poland, in Wielkopolska, whereas Krakow was the central settlement of the Wislan tribe.

966 Mieszko I, (a member of the Piast dynasty, the creator of the Polish state) was baptised at the occasion of his marriage to the Czech princess Doubrava. What follows was the christening of the previously pagan country.

997 Bishop Adalbert dies. St Adalbert - the bishop of Prague decided to bring to Christianity to pagan Prussians living in Northern Poland. He founded Gdansk although he was later killed on that mission. His remains were transferred to Gniezno. Adalbert became the first Polish saint and three years later the first archbishopric was established in Gniezno.

1025 Boleslaw the Brave was crowned as the first Polish king, this mighty ruler deposed Otto III (Roman Emperor) to become the lord of all Slavonic people. The two monarchs met at the famous Gniezno summit in 1000. Boleslaw died one year after his coronation ceremony.

1038 - 1050 Poznan and Gniezno were ravaged during a punitive trip of a Czech prince wishing to obtain the relics of St. Adalbert in Gniezno. Then the royal court under Kazimierz the Restorer moved to Krakow.

1109 Boleslaw the Wrymouth gained successive victories against German troops. He managed to incorporate large parts of Silesia and Pomerania. His political program of dominating western provinces was repeated as late as post WWII in a campaign to regain the "originally" Polish areas.

1226 Mazovian Prince Conrad invited the Order of Teutonic Knights to Northern Poland in order to gain their help against the adamantly pagan Prussians (a Baltic tribe). The knights were not very successful during the Crusades and it was in Poland (and the Kaliningrad enclave), where their dominions flourished. Teutonic Knights become later a dangerous challenge for the equally expansive Polish state.

1241 The Mongols invaded Poland (after destroying Kiev and Russia) and did most damage to the southern parts of the country, they were finally stopped in Silesia.

1333 Casimir the Great (III) came to the throne and started the golden era of the Polish Middle Ages: Wawel Castle was largely rebuilt and Krakow University founded in 1364.

1386 To face the threat from the Teutonic knights, Polish and Lithuanian dynasties united in Creva. Both independent states were ruled by one monarch coming from the Jagiellonian dynasty of Lithuania, they made their capital Krakow.

A Glimpse of Polish History