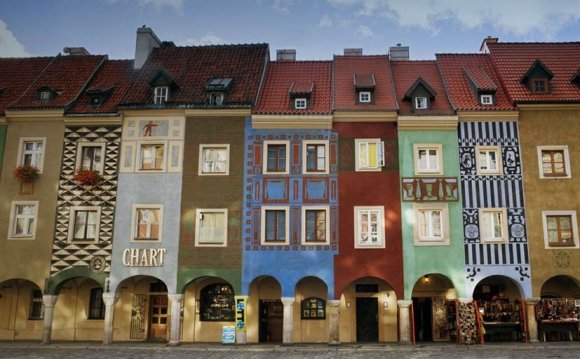 Pre war houses The pre-war stucco house is usually a one storey bungalow. It will have a kitchen with a wood or coal burning stove that will also provide heat to the rest of the property. The windows are not double glazed in the usual sense but are of the traditional stucco. There is one window on the inside of the property opening inwards and one on the outside opening outwards. Some of these houses have been modernised to add internal bathrooms but mostly not, and so although they were once inhabited 12 months of the year many are now regarded as stucco houses suitable for weekend and summer use.

An example of a house from the nineteen-seventies.

After the Second World War a growing middle class emerged in Poland and brick-built houses became popular. These are generally constructed out of large ceramic bricks (for good insulation) and the outside is then plastered over and painted.

Their layouts are broadly similar. There is a lower ground floor which is half below ground level and usually has small windows. Here there are storage rooms, sometimes a garage and often a second kitchen (or "summer kitchen"). The lower ground floor was used for drying meat, storing vegetables, etc., and acting as a useful insulation level.

These houses often have a second and third storey. These can contain the expected bedrooms and bathrooms, but many also have a kitchen on each floor. The reason is that a number of these houses were designed by their owners as "two-family houses" (or "three-family houses"). This was a practical move, often in preparation to provide separate space for sons or daughters (who married and had children of their own) while they were saving for their own house. Today they are equally useful as holiday lets or long term rentals. A two-family home can provide the foreign investor with the ability to buy a house and then rent part of it out thus ensuring someone is on site all year round while still giving them a holiday space whenever they want it.

A typical Polish house from the 1990s.

The lower ground floor layout has remained in most houses, providing garage space, storage areas, games rooms, saunas and more. As before, these often have their own front door, so they can easily be converted into offices.