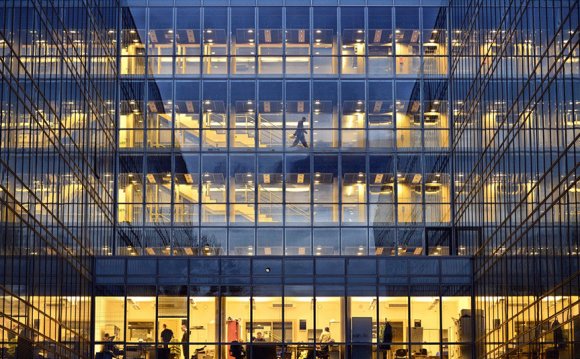 A man fishes in an artificial lake outside Poland's coal-fired Belchatow Power Station October 31, 2013. The Polish government's decision to host a coal-industry conference during international climate talks has drawn fire from environmental activists.

It's a tale of two conferences in Warsaw.

Inside National Stadium, the huge new football arena festooned in Poland's colors of red and white, delegates from 194 countries are gathered for yet another attempt to hammer out an international treaty to address the threat of climate change. Meanwhile, a short walk away at the national Ministry of Economy, coal industry leaders from around the world came together Monday and Tuesday, invited by the Polish government to a summit on the role of the carbon-intensive fossil fuel in the global energy future.

The juxtaposition has sparked outrage among environmental advocates gathered here. Some activists organized a loud coughing protest beside a massive set of inflatable lungs outside the coal conclave, while others clambered to the ministry rooftop to unfurl a mock national flag emblazoned with the words, "Who rules Poland? Coal Industry or the People?"

Although a sense of urgency pervades the 19th annual round of talks on global warming, so does the realization that no binding international agreement to cut fossil fuel emissions is in sight. Nations may have signed on to work together when the United Nations Framework Convention on Climate Change (UNFCCC) entered into force in 1994. But they've been riven apart since then by competing national priorities to bolster domestic industry or spur economic development. And that has meant a commitment to coal, the cheap fuel that has powered much of the economic progress of the past two centuries. (See related interactive map: "Four Ways to Look at Global Carbon Footprints.")

There's perhaps no better place to witness the conflict between coal and climate than Poland, one of the most coal-dependent states in the European Union. (See related quiz: "What You Don't Know About Electricity.") The latest government figures show that Poland generates more than 80 percent of its electricity from coal, a growing share of which is in the form of lignite, a low-grade mineral with high carbon content that is in ample supply in Poland's mines.

With most of the country's coal and lignite mining companies and electricity producers completely or partially owned or controlled by the state, the national imperative to boost the industry is clear. "The largest coal deposits in the [European Union] are in Poland, so over the next decade, coal will remain an important fuel and can be a guarantor of energy for the entire EU, " said Polish Economy Minister and Deputy Prime Minister Janusz Piechocinski in an opening day address at the World Coal Association summit.

U.S. Indie Filmmakers Set to Gather in Poland for Industry ...