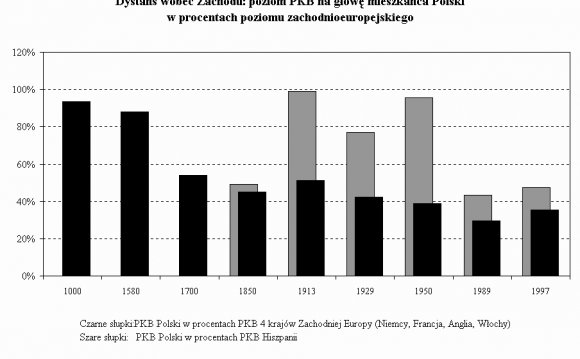 Poland’s economy expanded at least 3 percent for a seventh quarter in April-June as record deflation and falling unemployment powered household spending. The pace of growth slowed from the first quarter.

Gross domestic product rose 3.3 percent from a year earlier, compared with 3.6 percent in the first three months, according to a flash estimate published by the Central Statistical Office on Friday. The median estimate of a Bloomberg survey of 30 analysts also called for 3.6 percent expansion in the second quarter. The zloty weakened on the news as Polish government bonds gained ground.

Growth in the European Union’s largest eastern economy is benefiting from a pickup in consumer spending, driven by its first deflation in at least 32 years, higher wages and job gains. While no breakdown for the GDP data was given by the statistical office, Bank Gospodarstwa Krajowego economist Piotr Dmitrowski said the slowdown was probably driven by shrinking inventories and lower contribution of net exports as imports powered ahead.

“There’s neither a deep slowdown, nor a change in the trend, ” Dmitrowski said by phone on Friday. “Individual consumption and corporate growth remain solid and as long as this lasts, nothing wrong is going on with Polish GDP.”

The central bank has kept its main interest rate unchanged at a record low of 1.5 percent since March, as household spending, which contributes 60 percent to Poland’s GDP, helps sustain the economy’s resilience to global and regional shocks.

The zloty weakened 0.2 percent to 4.1877 to the euro at 11:50 a.m. in Warsaw, while the yield on Poland’s 10-year zloty bond dropped six basis points to 2.80 percent, the lowest level since May, according to data compiled by Bloomberg.

The unemployment rate slipped to 10.3 percent in June and will probably fall below 10 percent by December, Prime Minister Ewa Kopacz said on Wednesday. Full-year GDP may grow 4 percent in 2015 and top that level after 2016, the Finance Ministry’s chief economist, Ludwik Kotecki, told Dziennik Gazeta Prawna this week. Poland’s Purchasing Managers Index, a measure of manufacturing, jumped to a five-month high of 54.5 in August. A reading of more than 50 indicates expansion.

“We do not see this slowdown as alarming and in the coming quarters we again expect higher growth dynamics, ” Katarzyna Rzentarzewska, an economist at Erste Group Bank SA in Vienna, says in e-mailed statement. The start of the third quarter showed “relatively strong performance.” with PMI “again heading upwards.”