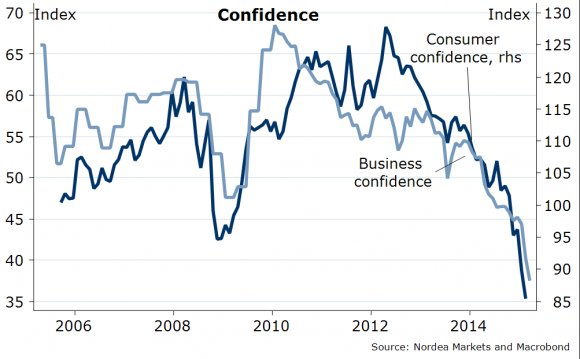 Poland’s economy will expand 2.9 percent this year and 3.1 percent in 2015, faster than last year’s 1.6 percent, the commission said today in its winter forecasts in Brussels. The 2014 estimate for Poland is the third-fastest in the EU behind Latvia and Lithuania. The Czech and Hungarian economies will grow 1.8 percent and 2.1 percent this year, the report showed.

Eastern Europe’s growth is picking up pace as a recovery strengthens in the euro area, which buys the bulk of the region’s goods. Improving employment prospects and looser credit conditions are also making consumers more confident to spend.

“The improving economic outlook in the main trading partners and the resulting pick-up in Polish exports are set to invigorate private investment and the labor market, which in turn is expected to support the recovery of private consumption, ” the commission said. The forecasts are “slightly above current estimates of potential output growth.”

As growth gathers speed and companies add workers, Polish unemployment will fall to 10.1 percent by 2015 from 10.4 percent last year, bolstering disposable incomes, according to the report. Inflation will be an average 1.4 percent this year and 2 percent next, compared with 0.8 percent in 2013.

Latvia will grow 4.2 percent this year, the EU’s fastest rate, followed by Lithuania with 3.5 percent, the commission said. The pair will grow 4.3 percent and 3.9 percent in 2015.

The Czech economy, the second biggest after Poland in the EU’s east, will grow 2.2 percent next year, while Hungarian expansion will remain at 2.1 percent, the commission said.

The export-led Czech economy will benefit from a pickup of business confidence in the neighboring euro region and the Czech central bank’s policy to weaken the koruna, according to the report. Domestic demand will strengthen “appreciably” next year as the labor market improves, the commission said.

Growth in Hungary, the EU’s third-largest eastern economy, will be driven by an improvement in domestic demand as the lowest inflation in more than four decades boosts disposable incomes.

“Yearly household consumption is expected to return to positive territory from 2014 due to further improvements in real disposable income, partly linked to the regulated price cuts and increasing public sector wages, but also looser lending conditions as a consequence of new subsidized mortgage schemes, ” the commission said.