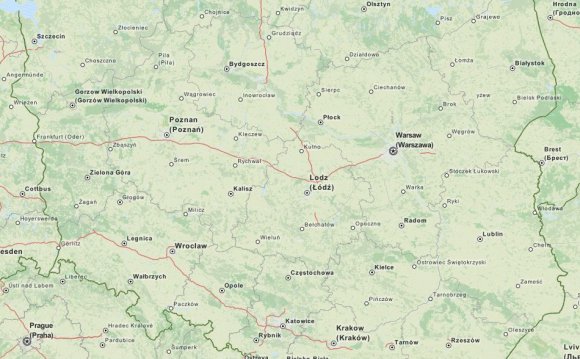 Republic of Poland is located in Central Europe. It shares its borders with Germany to the west, the Czech Republic and Slovakia to the south, Ukraine, Belarus, and Lithuania to the east, and the Baltic Sea and Kaliningrad Oblast to the north.

Poland History
In 966 AD, Slavic chief Mieszko united the tribes of the region of Poland, and was named the 1st Prince of Polska. The Kingdom of Poland was then established in 1025.
In 1569, Poland and its neighboring country Lithuania, joined forces and created the Union of Lublin. But Poland's government became weak in the 1700's, and in 1795, the region was conquered and divided between Austria, Russia, and Germany (which was named Prussia at the time). For the next 123 years, Poland as a country did not exist.

Poland was restored after the 1st World War in 1918. However, its status as an independent sovereign nation was cut with the 2nd World War. Germany and Russia had made a secret agreement to divide Poland amongst themselves, and started to invade the region on September 1939, which marked the beginning of the War.

During this dark time of Polish history, millions of Jews were killed by the hands of Nazi Germany, forcing its own government into exile. When the war was over, about 25% of the population had been killed. In 1944, Poland became a Soviet-based Polish provisional government, and in 1952, a Communist country.

In the 1980's, a group of workers formed the Solidarity Trade Union, which later on became a mass movement. By 1989, the revolution spearheaded by the Solidarity, overthrew the Marxist-Leninist government. Poland adopted a new constitution, and established itself a democratic country.

Geography
Poland is found in Central Europe. It is bordered by the Baltic Sea to the north, Lithuania and Russia's Kaliningrad Oblast to the northeast, Germany to the west, Slovakia and the Czech Republic to the south, and Belarus and Ukraine to the east.

Poland has a wide variety of landscapes, characterized by sandy beaches on the coast of the Baltic Sea in the north, the rolling lowlands in the center of the country, and the snowcapped mountains of the Sudeten and the Carpathian in the south.

The country is home to primary forests that are homes to some of Europe's endangered species, such as the the iconic European bison in the Bialowieza Forest, and other animals like the brown bear and the wild horse.

Polities
Poland is a parliamentary representative democratic republic, with both a Prime Minister and a President. The Prime Minister is the Head of Government, and leads the Council of Ministers. The President is Head of State and Supreme Commander of the Armed Forces.

Executive power is exercised by both the President and the Council of Ministers.

Travel
Poland is among the top 20 most visited countries in the world. In 2013, it received a total of 15.8 million visitors. Tourists visit Poland for its natural beauty, religious sites, and historical monuments.

Warsaw is the nation's capital and offers all the comforts of an urban city but also the appeal of an old charming town. Most of its historical buildings and structures were destroyed in the 2nd World War, and the infrastructure found today were mostly built from scratch after the war. Among the preserved historical areas of the city is the Old Town, which is a UNESCO World Heritage Site, as well as other monuments and museums. The Old Praga section of the city hosts small charming cafes and stores, as well as art galleries, and clubs.

For the most visited city in Poland, Krakow offers the most tourist attractions. The 2nd largest city of the country boasts of castles, churches, theaters, and many historical sites that define the country's culture and identity. Among these are the Main Square, the Cloth Hall, and the Wawel, which is a fortified architectural complex.

The Auschwitz-Birkenau State Museum is one of the most visited sites in Poland. Found in Oswiecim near Krakow, this UNESCO World Heritage Site was the center of the Holocaust for European Jews, and visited by millions of tourists each year.

Education
According to the Economist Intelligence Unit in 2014, education in Poland is the 4th best in Europe, and the 10th best in the world. There are over 500 university institutions in the country, which is one of the largest numbers in Europe.

Poland's first university, the Jagiellonian University in Krakow, was established in 1364, and is the 19th oldest in the world.