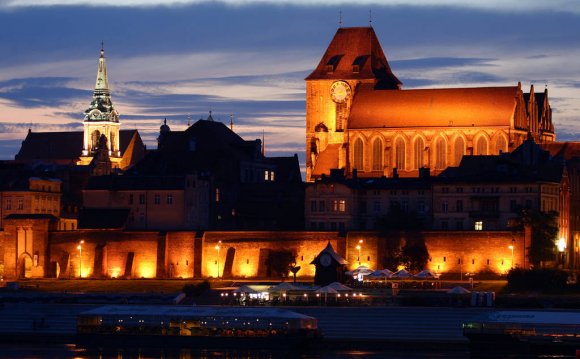 Why do business in

Europe ’s sixth-biggest economy. It was the only country in the European Union to experience positive economic growth in 2010. Also in 2010, Poland was ranked among top potential investment destinations for FDI projects in

Europe by the managers of multinational companies in the Ernst & Young European Attractiveness Survey.

Poland ’s location offers numerous advantages for business. The country is located at the very heart of

Europe . It borders on both the EU member states ( Germany , the

Republic , Slovakia and Lithuania ) and the Eastern European countries Ukraine , Belarus and

Russia . This means access to 250 million consumers within a 1000 km radius. East-west and north-south transit routes cross within

Poland ’s territory. The continuously developing network of roads and motorways facilitates logistics. The proximity of both EU and Eastern European selling markets promotes exports of goods. Numerous airports and seaports allow the transport of goods all over the world.

Poland – this is almost half of the population of student age (19 to 24). Each year, 400, 000 graduates complete studies at half a thousand universities, and the numbers keep on growing.
Well-educated Polish graduates are highly sought-after and appreciated employees who find employment in international companies and institutions. They have a very good command of foreign languages – the majority of them have mastered English. Many learn other foreign languages too – mainly German, Russian, French and Spanish.

More and more students choose to study at technical universities, which educate engineers, IT specialists and scientists – graduates are sought after and valued, not only in the domestic market, but in the whole of

Europe ’s sixth biggest economy. In the years 1996 – 2009, the GDP hovered around 4.5%. It was the only country in the European Union to maintain positive economic growth in 2010.

Europe . The number of new investment projects is constantly growing, especially in the automotive, R&D, electronic and chemical sectors. In 2009,

The Polish economy faces prospects of further dynamic growth. In the years 2007-2013,

Poland is estimated to be receiving approximately EUR 67 billion of funds from the Community budget. This means that it is the largest beneficiary of EU funds. Furthermore, the hosting of the UEFA Euro 2012 went to Poland and

Ukraine , heralding the development of infrastructure and the building, service and tourist sectors.