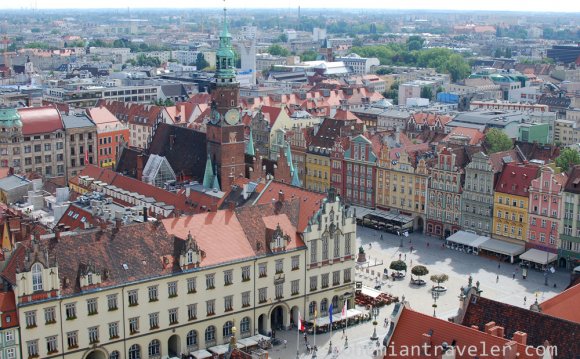 There are cities that are as uninteresting as the stone they are made of, rigid and heavy, done up as stylishly as if they had been completely untarnished by the vagaries of history. And then there are the other kinds, the raw, rough, unfinished and exciting cities of the world.

Warsaw is one of those cities, a place that seems to crackle and groan in all of its unfinished glory. No one would dream of calling the Polish capital a beautiful place. But how much it breathes history, how many critical, comforting and tragic things it says about the course of time to those who not only contemplate but also scrutinize its building blocks is evident in many of its structures. It is especially evident in the new football stadium in the Saska Kepa quarter on the east bank of the Vistula River, the place that will transfix billions of people on June 8, the day of the opening match of the European football championships.

Warsaw, 68 years earlier, less than a stone's throw away. Resistance fighters with the Polish Home Army are crawling through cellars, sewer tunnels and secret underground passages, rallying against the savage German occupiers. They strike out, armed with the courage of despair, and they manage to capture important parts of the city. They are counting on Stalin's help, after hearing on Radio Moscow that the Soviets have promised to support them militarily. But instead the Soviet dictator orders his troops to sit tight and do nothing, in the exact spot where this year's football championship is to take place. Stalin has no interest in self-confident Poles who liberate their capitals under their own steam. The Nazis massacre 180, 000 Poles, and large parts of the city are reduced to rubble. The Russians eventually do liberate the Poles, their "sister people, " but not until January 1945 - on their own terms.

In 1955, the new Communist leaders serving at Moscow's pleasure build the "Tenth Anniversary Stadium." Sloppily constructed and soon too run-down for sporting events, for years the structure stands as a symbol of the decay of communism. In 1983, Pope John Paul II, a superstar for the Poles, celebrates a mass in the stadium. The choice of Karol Wojtyla to be the successor of St. Peter proves to be yet another important nail in the coffin for the communist system.

A Pioneer and Role Model

The site undergoes yet another transformation. Counterfeit CDs and bootleg liquor are sold within the stadium, and one of the biggest open-air markets in Eastern Europe becomes established in the stands. Starting in the mid-1990s, almost anything can be bought there: Kalashnikovs from Russia, black-market cigarettes from Ukraine and cheap clothes from China - and women from all over the world. In 2008, after the European football championship has been awarded to Poland and Ukraine, demolition of the stadium begins.

Construction is now complete. The modern venue for the European Championship has risen from the ashes of the old stadium, a dream in the Polish national colors, red and white, designed, ironically enough, by a German, covered with glass and complete with floodlights, video screens and a retractable roof in case of rain. The stadium, with a capacity for 50, 000 fans, built out of the ruins, truly and conclusively oriented toward the future, is not just a building but a symbol. With this marvelous stadium, Poland wants to show the world its new face and prove that it has overcome the shadows of the past: the crimes of the Nazis, Communist oppression and the chaotic capitalism of the period after the fall of communism.