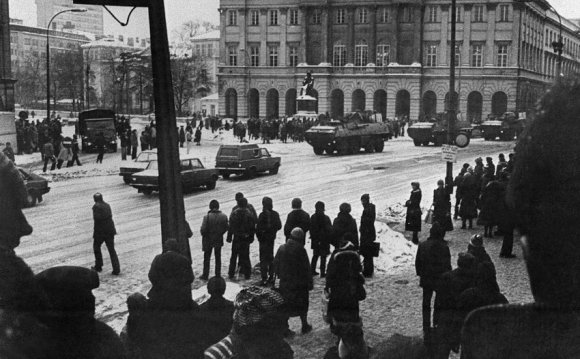 Stalin said that imposing Communism on Roman Catholic Poland was as absurd as putting a saddle on a cow. But after World War II, he went ahead and imposed it anyway, even though the roots of Communism in Poland had never run very deep.

The imposition of Communism was further complicated by Stalin's prewar decision to disband the old Polish Communist Party and expel it from the Communist International, presumably because of its nationalist taint and as a gesture of good will toward Nazi Germany, a sequence of events that led to the Molotov-Ribbentrop pact and the division of Poland in the first weeks of the war.

As the war was ending, the Polish Communists were weak and divided, with those who fought as independent guerrillas being openly distrustful of the Polish operatives who were returning from exile in Moscow. One such group arrived in the town of Chelm, where on April 21, 1945, under protection of the advancing Red Army, they proclaimed a provisional government. The date is celebrated as the official national day of the Polish People's Republic.

The Chelm group was put in place by the Kremlin to challenge the claims to legitimacy of Poland's Western-oriented exile government in London. As Soviet troops occupied Poland, key leaders of the London-based government reluctantly returned to join in a government of national unity for fear that if they did not, Soviet puppets would simply take all power. Those fears were heightened by the Potsdam and Yalta agreements, in which the Western powers acceded to the reality of the Soviet military occupation of Eastern Europe. Consolidating Power

During two years of awkward coalition, Stalin's Polish satraps began moving to establish Soviet-style control over the economy and social life of the country. In 1946, a national referendum, now widely believed to have been rigged, called for the nationalization of medium and heavy industry as well as granting the Communists a deciding role in national affairs.

In this period anti-Communist bands took up arms in what Poles refer to as a partisan war. Meantime, with the backing of the Soviet Army, the Communists moved to abolish people and factions identified with the wartime government in London. Stanislaw Mikolajczyk, the best-known politician of this group, was hounded into flight while his closest aides were accused of treachery and imprisoned.